Here is a quick review of the Samsung latest smartphone Samsung Galaxy S3 that is launched last week in Nepal by IMS (International Marketing Service). At first, they are launching the smartphone in one-year installments with Ncell. One month later, they are going to sell it in the market as well.

Samsung currently holds more than 50 percent of the total handsets market here in Nepal and with this latest flagship having features advanced than iPhone 4S, they are going to get a good share of the higher-end smartphones in Nepal, beating Apple’s iPhone.

Equipped with the Ice Cream Sandwich V4.0.4 Android operating system, the phone has a Quad-core 1.4 GHz Cortex-A9 CPU.  It has a 4.8-inch super AMOLED capacitive touch screen with multi-touch functionality. The device comes with an 8-megapixel camera with features like autofocus and LED flash.

Other features of the handset’s camera are simultaneous HD video and image recording capability, geo-tagging, touch focus, face and smile detection, and image stabilization. The phone also has a 1.9-megapixel front-facing camera. Samsung has equipped the device with a relatively large 2,100 mAh battery, an ultra-light, and an ergonomic design with a finish called the hyper glaze. 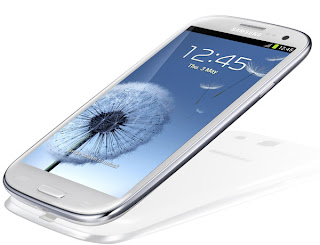 As for memory, the Galaxy S3 to be sold in Nepal has an internal storage capacity of 16 GB which can be upgraded to up to 64 GB with a microSD card.

The device incorporates various features such as “smart stay” which tracks the eyes of the user so that the display won’t dim or turn off as long as the user is looking at it, “s-voice” which enables users to dial the number through voice command, “all share cast” which pairs TVs,  laptops or tablets with Wi-fi and “NFC” which allows users to share contents like the video by tapping the phones together.

The phone is going to hit the shelves at an introductory price of  NRs 67,000. Find the latest price of all other Samsung Mobiles available in Nepal.