Nepal Telecom to launch WiMAX in Kathmandu from November 12.

Share
Nepal Telecom is going to launch the broadband internet service WiMAX from November 12 (Kartik 27) in the Kathmandu valley. Earlier the release date was announced to be November 9. Though it was expected the service to be launched for normal customers, the service in its first phase will be available only to Corporate houses like Business offices, Hospitals, Education Institutes, Embassies, Tourism offices, Government/semi-government offices, NGO, INGO.

Planned for the whole of Nepal, this service will now be available in the Kathmandu Valley from Sanga in the east to Balambu in the west and from Budanilkantha in the North to Dakshinkali area in the South. Nepal Telecom ensures the data rates to be above 256 Kbps, which in near to base station (tower) soars up to Mbps.
The state owned company has released three Volume based packages based on the data rates (256 Kbps, 512 Kbps and 1 Mbps), of which they will be providing 1 Mbps 30GB Volume and beyond package only to the Business offices for some months. Here is the WiMAX tariff as provided in a press release by NTC. 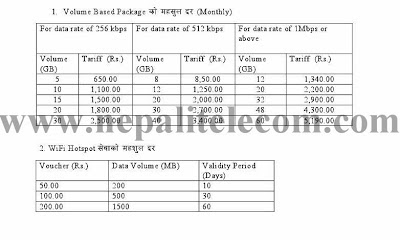 Earlier posts on Wimax.
What is WiMax?
Wimax to launch this festive season.

WiMax currently being tested in ktm.