Share
Nepal Telecom, having the biggest market capitalization in Nepalese share market, almost one fourth of the total capitalization, held  its fifth Annual General Meeting today. With almost 8.5 M (85 Lakh) subscribers,  NT even  increasing its annual revenues by near 15% to sum Rs 36 Billion and 790 Million, the net profit (after taxes) decreases by 600 Million to Rs 11 Billion and 600 million due to first installment payment of License renewal fee for Rs 20 Billion within 8 years. Sum of Rs 4 Billion was paid during the Fiscal year 2068/69 B.S to NTA (Nepal telecommunication Authority) which make the profit to decline compare to previous year.

In presence of around 300 shareholders in Nepal Army Officers Club Hall, NT fifth AGM has decided to give 48 percent dividend to its shareholders based on the profit for the fiscal year 2068/69. The Meeting also delved into various ways of keeping the company’s strong position in the telecom market and maintain good quality in all of their services.

NT has also promised for fast and smooth implementation of upcoming projects for cheap, ubiquitous and good quality network. As Government of Nepal has already decided to bring forth the procedure for inviting Strategic partner in Nepal Telecom, they want to easily face the present challenges with it for Shareholders value maximization. Meanwhile, NT board Chairman and secretary of Ministry of Information and Communication Dhurba Prasad Sharma addressed several issues put forward by the shareholders in the meeting. There was strong views in the meeting for issues like employee satisfaction, appointment of Nepal Telecom’s MD by Independent Board, representation of shareless employees in the board, protection of Shareholders wealth and maximization, customer oriented mindset and Fast Implementation of new projects/ fast maintenance which are taken positively by the Annual General meeting. 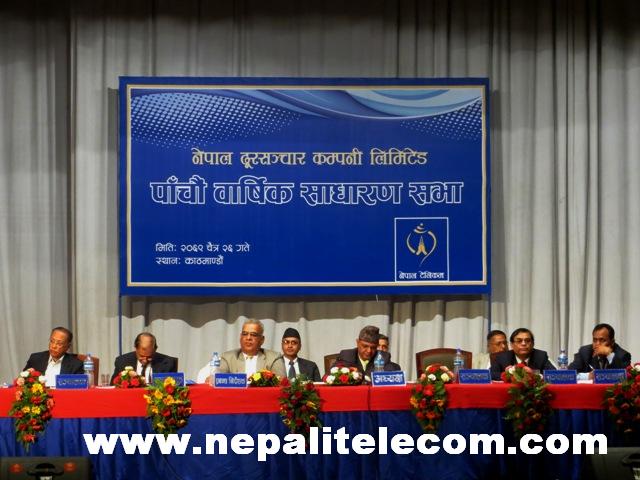