Teledensity indicates overall telecom development of a country, which measures the no of phones per 100 people. According to the latest MIS report from NTA (Nepal Telecommunication Authority), Teledensity surges to 88.5 percent in the country. It includes 2.35 Million total  no of phone lines  in which mobile alone contributes to more than 2 Million. Now all of the investment and competition in telecommunication is happening in the mobile sector. So the no of mobile lines are increasing  very rapidly.

Government owned Nepal Telecom and Private Giant Ncell are the top two telcos that have their services all around the country, who are going fierce with the expansion of their services to vie for the top spot. Ncell passes Nepal Telecom in the no of SIM/ phone lines distributed ( 1 Million vs 1.1 Million). But it is known that NT still has high number of active subscribers. So far the no of active mobile phones for both the operators are more or less equal. But due to other services of NT, telecom analysts predict little higher active phone lines in NT. This can only be confirmed if we look the VLR of both the operators. Visitor Location Register shows the active no. of subscribers.

GSM is the most popular technology here in Nepal with almost 2 million users. It has a huge addition in each month whereas CDMA and Landline subscribers are growing in a very lazy rate. The internet penetration rises to 31.69 from 31 percent in the month of Chaitra, which is mainly due to the expansion of GPRS and 3G across the country by NT and Ncell. These days NT is more aggressive in expanding their network whereas Ncell is promoting their already existing network with schemes/offers. With the current trend, the internet penetration will swell to 50% within this year. 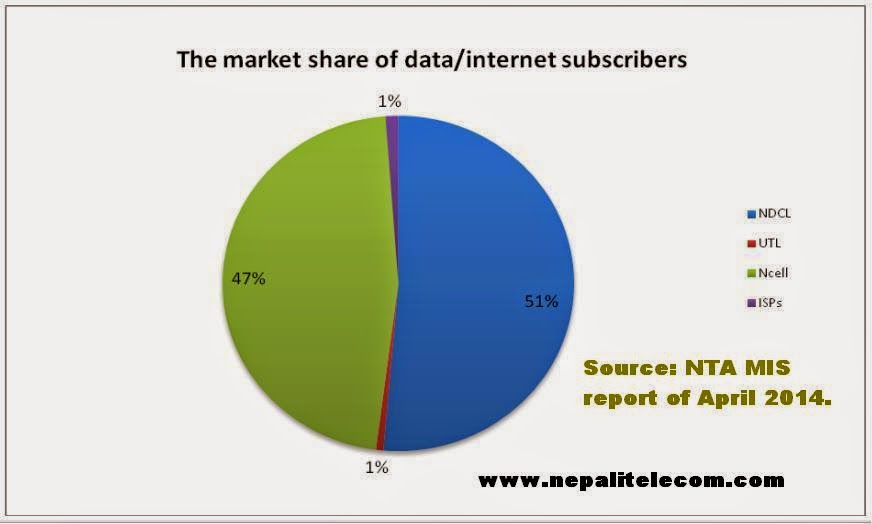