Back in 2012, we had done a survey about the penetration of types of phones in Nepal. That time it was done online with the website Nepalitelecom.com and our Facebook page, the result found Nokia to dominate the Nepali handset market with 48 percent (click for more details). This time we had the opportunity to get it done during the CAN Infotech 2015 Exhibition at Bhrikutimandap, where we requested the visitors to fill the survey and submit there only. We had collected data from thousands of forms and found the following result.

According to the Mobile survey, Samsung is found at the top spot with 39 percent market share, as the way it stands for the whole world (but a little higher market share here as compared to the world). Though Nokia sold its mobile business to Microsoft and has very little share in the world, it stands at the second spot (with 20 percent) with the majority of them being old operating system Symbian OS.

Apple has given a good fight against Samsung in the last two quarters with the popularity of the iPhone 6 in the world (including the overwhelming sales in China). Apple stands third here in Nepal (with a 10 percent share) due to the gigantic price of the iPhone here. 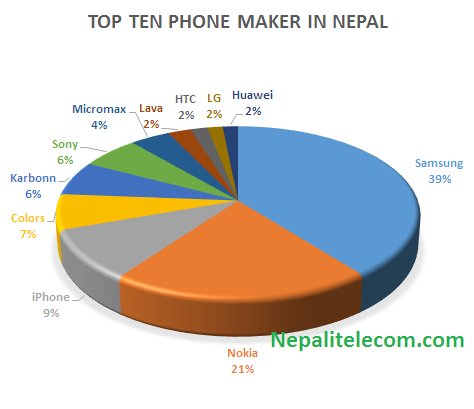 The rise of Chinese handset makers (like Xiaomi, Meizu) in the world still has no great impact on the overall market share here in our country (due to their unavailability), but Indian brands like Colors, Micromax, and Karbonn have got a significant dominance with the broad range of price and features.

As found from the survey result also, these Indian firms take a good position after the top three vendors, which is expected to rise more here in Nepal (Official launch of Android one to expand the rise). Chinese handset maker Huawei is at the tenth position with a 2 percent market share, the same percentage as with Lava, HTC, and LG.

If we see the total smartphone penetration in the country, it is near to 20 percent as predicted from the data back in 2014. But this percentage share is found to be high in a city like Kathmandu (where the data was collected). According to the survey data, smartphone penetration is found to be around 65 percent in the capital, with the dominance of Android phones (60 percent among them).

This is the first outcome of the Mobile survey result of 2015 for the Top Mobile phone makers in Nepal. More results will be coming soon. Please stay in touch.