Share
May 10, 2015: Nepal Telecom, the government owned telco has donated Rs 28 crore (280 million) to PM disaster relief fund. In a bid to support the relief distribution to the earthquake victims, Nepal telecom’s Chairman Sunil Bahadur Malla handed over the Rs 250 million cheque (from company itself) to Prime Minister Sushil Koirala whereas Nepal telecom’s MD Mr. Buddhi Prasad Acharya gave a cheque worth Rs 2.75 crore (27 million) to PM that was collected from the employees salary. Minister for Information and Communication Mr. Minendra Rijal was also present in the handover program held today in Baluwatar. Nepal Telecom even announced of contributing Rs 1 billion for the reconstruction of the structures (Cultural heritage sites like Dharhara, Shoyambhu, Manakaman Temple, Durbar squares in Kathmandu, Lalitpur, Bhaktapur and schools) that are devastated by the Baishak 12 Earthquake. NT assured of the huge fund usage to be under the directives and plan by Nepal Government.
There was highly rough estimation in the amount of the free calls that NT made for their subscribers, immediately after the quake till one week, NT disclosed the amount to be Rs 1.46 billion for national/international Calls, SMS and data usage. Thanks to Nepal Telecom for the free service and the donation, You have made us realized what a national operator can do for their own country. The company deserves a big salute. Hats off. 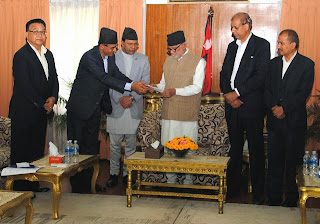