Share
Sep 30, 2015: Google has announced two new Nexus phones in the series of its own design and pure android smartphones. Nexus 5X and 6P, made by LG and Huawei respectively are unveiled in a Nexus event at San Francisco. The full metal body, 7.3 mm thin, comfy Nexus 6P has a display of 5.7 “, Snapdragon 810 64 bit processor underneath, 3450 mAh battery. The flagship phone owns a Type C USB port, 3GB RAM and low light sensitive camera of 12.3 MP/ 8MP. The camera provides you best low light experience (indoor photography) with 1.55 micro pixels and best selfie with HDR plus feature. The phone is known to be running on new Android 6.0 Marshmallow. Hardware wise, Google brings new finger print scanning features with Nexus imprint with the sensor in the back. The phone is priced at 500 $, with availability sometime in October. 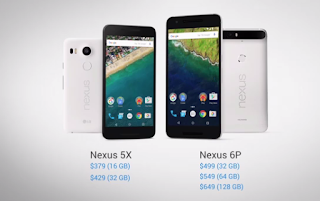 Nexus 5X is relatively low end with plastic built 136 gm weight, 5.2 inch display and 2700 mAh battery. The plastic phone comes with 64 bit Snapdragon 808, 2G RAM. Most of the hardware features are same as 6P like Camera and Nexus imprint feature. The camera as they told outperforms the previous edition of Nexus and iPhone 6S in low light due to higher pixel density, laser detect auto focus but 5X has 5M camera in the front. The phone supports Slow motion video and smart burst for animated GIFs. The camera is known to be missing the Image stabilization feature as found on the other flagship phones. Nexus 5X is priced at $379, and is available for pre-order at Google stores in two dozen countries.
Well the prices have gone down, with upgrade in Hardware and features but more details will only be known with the experience videos.
Both the phones will be running on Android 6.0 Marshmallow.
Features of Marshmallow:
Apart from two new Nexus phones, Google announced family plan for Google play music, Nexus protect and improved Google photo applications.
Source: