Share
April 10, 2016: Xiaomi is already officially here in Nepal with the launch of Mi4 flagshipand cheaper Redmi 2 phones. The sales of the older but still not outdated phones are going very well and Nepali people are craving for much more devices (phones, accessories, TV and other connected devices) from them. Xiaomi has started teasing the launch of a Redmi Note series phone in its official Facebook page. Though it has not mentioned the version of Redmi Note in the page and left a guessing game for the public, it is quite obvious from the timing and the looks that it will be Redmi Note 2. We could also speculate Redmi Note 3 to launch but as it is even very hard to get it in hand in China and India, this is quite impossible for now in Nepal. Most probably the extra stock of Redmi Note 2 available in China, India could be made available here in Nepal. The basic version of 16 GB memory and 2GB RAM phone costs around 800 RMB now in China and 8000 Indian Ruppes in India. So the price of the Redmi Note 2 could be in the range from Rs 13,000 to Rs 14,000.
Specs of RedMi Note 2:
5.5 inch IPS LCD screen
Octa Core MTK helio X10 2GHz
2 GB RAM
16 GB Memory, 32 GB for Redmi Note 2 prime
Camera: 13 MP/ 5 MP
Dual Micro SIM slot
Supports 4G LTE
Removable Battery: 3060 mAh
IR sensor
MIUI 7 over Android 5.0 Lollipop 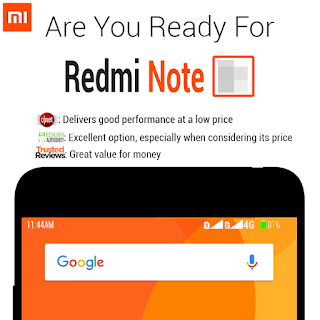 It is not known whether the 32 GB version i.e. Redmi Note 2 Prime will be launched together. More information when we get it officially.