Tele-density is one of the metrics to measure the telecommunication development in the country. The metric has come a long way from the mere 4 to 5 percent in 2005/ 2006 to 60 percent in 2012, which shows the massive distribution among Nepalese population. That is quite impossible without the expansion of the mobile networks through out the country. Teledensity is the percentage of people that have access to any means of telephone in average. It includes landline or mobile phones or WLL or any satellite phone.

The value of 106 percent does not necessarily mean the no of people with mobile is greater than the population. The reason is due to dual SIM handsets, unused SIM cards from people gone abroad and one person carrying both SIM cards.

It is a big achievement for the rapid development of mobile network in our country. The result is actually the outcome of neck to neck competition between two major operators Ntc and Ncell to get bigger market share and revenue. For which they are opening up new cell towers in various locations. The mobile handsets, the SIM card itself and the tariff  is now affordable to people of different economy level. It has become an integral part of our life. So we use it every time to communicate with people anywhere from the traditional voice call or the OTT applications like Facebook, Viber, Skype, Whatsapp. 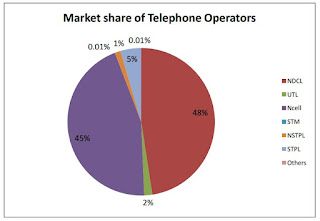 For data also, NT stands the top with 56 % market shar. Similarly Ncell is next with 41% share in data. 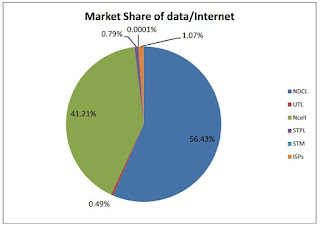 Internet services are either fixed ( ADSL, Fiber to the home, Cable internet) or wireless/ mobile (GPRS, WiMax, WiFi). Those internet service from different data communication technologies, has grown significantly over the years. But the number is still yet to reach 50 percent mark.
This means Nepal has a lot of potential market in extending the data services reach. So Nepal needs to bring Efficient technologies with sufficient policies and resources ( infrastructure, Spectrum). It will bring bigger footprint and better quality in both voice and data services. 4G is such technology which will change the broadband ecosystem in Nepal.

Nepal Telecom increases its profit by 10 percent, for 1st Q…

Unique Mobile subscribers in the world cross the 5 billion…