Google to use ballon internet for remote areas with project loon.

Share
June 20: Google’s next big announcement after project glass and driver less car is an innovation to provide internet access in remote areas. As 2 out of 3 people on earth are out of reach to internet, Google intends to use hot air ballons, flying 20 km above the earth to provide wireless coverage below where terrestrial connectivity is too much to get.
Named as project loon, Google experiments the use of series of solar powered ballons that flows with the wind in the stratosphere (above airplanes and weather) to provide 3G like internet speed. 13 meter high such ballons are equipped with special radio frequency devices to connect with each other and then to the ground (40 km in diameter coverage to earth per single ballon). Each user in the coverage area also need to have special antenna fixed in their home for connectivity with the ballons. The operational frequency is known to be in ISM band (2.4 GHz and 5.8 GHz) that is freely available to anyone. The ballons are also known to be having GPS, parachutes and other equipment for monitoring weather conditions to keep itself in the right place. 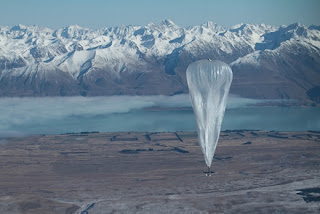 As the pilot program for the project is just launched in New Zealand for 50 testers from 30 ballons, it is still being tested for problems and complexity before making it available worldwide. Some people even dub it as a cellular network with ballon instead of towers.
If the project loon is found viable and launched worldwide, then the internet ballons will be beneficial to reduce the global digital divide: the gap between have and have nots, enabling advancement in education, agriculture, health, small business sectors in countries like Nepal with remote areas where terrestrial internet is a big challenge and also not forgetting the internet reach in disaster affected areas. But there are still some chances if the project turns out to be a loony one (as the name has it), due to the challenges in stability of the ballons and other complexities. We all wait for the future.