Share
March 2, 2015: Samsung the top phone maker in the world, has launched two new flagship devices in the annual Mobile World Congress in Barcelona. The two new devices named Samsung Galaxy S6 and S6 Edge are both powered by 64 bit Exynos Octacore processor, 3 GB RAM (DDR4), and the latest Android Lollipop (Android 5.02).
The 5.1 screen is of Super AMOLED technology has a bright and vivid display, with higher QHD resolution (2560 X1440, 577 PPI) as compared to its predecessor S5. Both the devices are sported with better and faster 16 MP rear and 5 MP front camera, having superior quality images (even in low light), along with features like Auto Real-Time HDR, Smart OIS (Optical Image Stabilization), and IR detect White Balance, which is more enhanced by the direct access “quick launch” feature.

Apart from the high-end feature, Samsung has focused on the design and looks, being impressed by similar metal smartphones (like iPhone 6). The Glass encase both in the front and back has Corning Gorilla Glass 4, making it look premium and feel comfy. Additionally, the curved edges on both sides in the S6 edge make it look different and the first smartphone to have like that. Some of the features that disappeared with these new flagships are the non-removable battery/back, water-resistant feature, and microSD card slot, which may disappoint many. 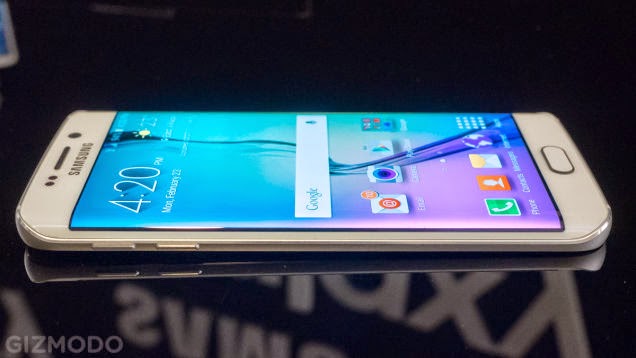 Apart from the curved edges, S6 Edge is slightly lighter, has a better resolution display, and a somewhat higher capacity battery (2600 mAh over 2550 mAh). The battery capacity does not seem enough for the LTE Cat 6 (300 Mbps/50 Mbps) enabled phone but the efficiency and fast charging technology need a field test. Quick Contact in the edge is one of the new features for the S6 edge for some tricks.
The phone comes in basic storage of 32 GB, along with 64 GB and 128 GB variants. The phones are known to be available on sales from April 10th ( in 30 other countries) with prices ranging from USD 800 to 900 ( NRs 80,000 to 90,000) but the official prices are not yet out and the release date here in Nepal (confirmation from IMS is pending).
Along with the phones, Samsung has also launched a new payment platform “Samsung pay” to counter Apple pay and Google wallet.
With the specs, looks, and reviews from pundits, the S6 and S6 Edge keep Samsung alive for the competition in the high-end market (wary of premium looks and features) but need some more innovation to compete with the cheaper Chinese firms.