Share
July 9, 2016: It was in news that Nepal Telecoms MD selection process in on the way. Today, the committee for the selection of MD for the Government owned telecom operator, Nepal Telecom, has published a vacancy for the post in national dailies like Gorkhapatra, Kantipur. They have given 21 days for the prospective candidates to apply for the post, by submitting application along with their Bio-data. As known earlier, the criteria for the new MD in Nepal Telecom says any personnel of age between 40 to 58, and having experience of 15 years in Nepal Telecom or similar operator or Governmental or semi government organisation with 5 years tenure in senior officer post (8th or 9th level or Managers Level (10th) or First grade and above).

Tenure of Current MD Mr. Buddhi Prasad Acharya will be completed on Bhadra 20. He was appointed by Sushil Koirala led government, which made the technical groups including engineers to agitate against the decision, as it was the first time in history that NT got a MD from non technical background. He is a charter accountant by profession but of senior rank in the Deputy Managing Director position that time. After 22 days of protest by technical group, a pact was reached between then MOIC secretary, NT MD, Coordinator NTTG and all union heads that paved the way for major decisions in the company including capping, VRS, Company structure. A committee was also formed to recommend on the MD criteria for Nepal Telecom as there was no any criteria before and Government used select among the senior technical DMD’s. Based on the study on technical companies both inside and outside the country, the report from the Tirtha Man Shakya led committee has recommended for the Education qualification to be an Engineer with Masters degree in Management or respective technical subjects for a competitive technical company like Nepal Telecom.

Sushil Koirala led Government had made a first edit on the TOR, as per recommendation from NT board, which included the qualification to be having education of Masters level in Commerce, Economics, Business Administration, IT or Engineering and having experience of fifteen years in any telecom operator like Nepal Telecom, which should include 5 years in senior officer post.
Current government has made the changes in the TOR without any significant logic for getting better CEO in the 92 percent government owned company. The latest change in the TOR has added Masters in development, Management to the range of educational qualification, and opened up to any personnel with experience of 15 years in telecom operators or government owned/ Semi government organizations including 5 years in the position of Senior Official (8th or 9th level) or Managers (Level 10th or above/ First grade or above). While there is equal chance of appointment of new CEO from officials working in other government owned organizations, they have made a criteria to give extra 3 points ( out of total 15 points) for the ones who is eligible from the company itself.
Previously we wrote the position to be a CEO (Chief Executive officer) as mentioned in the Company structure whereas the new vacancy tells it to be Managing Director (MD).
Here is the advertisement published in national dailies. 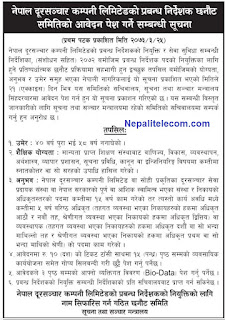 NT to launch 4G and give hydro share to its customers.

NT to launch 4G and give hydro share to its customers.