iPhone 5 is termed as the thinnest and lightest smartphone till now in the market as claimed by the manufacturer Apple and it seems they have downsized many components to make it thin and light, the integrated display(the screen having the touch censor) being one of them. Nokia on the other hand claims their latest flagship to be the brightest smartphone with HD display. Samsung claimed their smartphone Galaxy S3 to be the Smartest phone with display lighten till you close your eyes and lifting of the call as you put the phone in your ears like features.
All three devices have LTE capability though their operating frequencies are different depending on the carriers they deal with ( LTE frequency spectrum shown in the chart below). iPhone 5 slips a little with no NFC support which goes against the major speculation whereas Nokia 920 and Samsung Galaxy S3 both have NFC support.
Nano SIM is what Apple’s iPhone 5 take in, whose size is smaller than the micro SIM that Nokia 920 and Galaxy S3 supports. This makes the iPhone 5, clumsy to be used immediately in countries like Nepal where nano SIM card is not being distributed by the telecom operators, and gadget buffs have to wait till the nano SIM becomes available.
We take a look at the processor specs when it comes to compare the speed and processing capabilities of a phone but Apple’s Dual core A6 processor falls short as compared to the Qualcomm’s processor in Nokia 920 and Samsung S3.
Panorama feature in Apple’s iPhone 8 MP sapphire Lens Camera is big to many who don’t know the presence of many Android applications to get a better panoramic photo. Nokia Lumia 920’s 8MP pureview Camera with better image stabilization and longer shutter is a major feature for the photography driven Smartphone user.
Now lets put the point wise comparison of the iPhone 5, Samsung S III and Nokia Lumia 920 in the picture below. 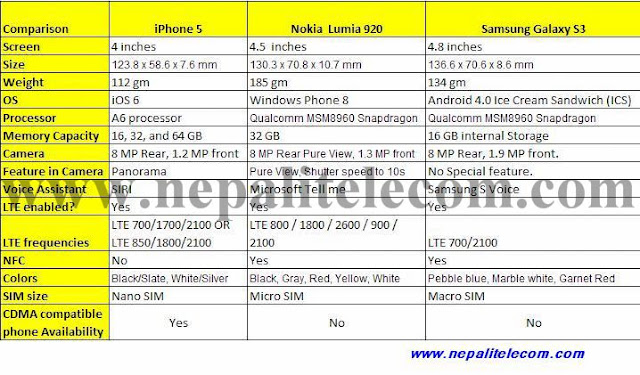