Share
After forfeiting ZTE’s bid bond worth $4.6 Million for 5.2 million GSM lines (package A of 10 M lines) and Ericsson indifference to the call made by Nepal Telecom, NT is going to issue LOI (letter of intent) to Huawei to undertake the project. Huawei bagged 4.8 M GSM lines for Kathmandu and WDR 2 moths before, and the work has already been started for the installation of new equipment in Kathmandu. 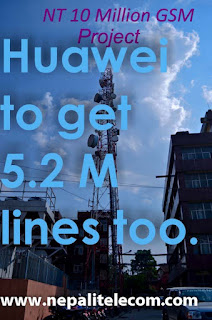 It is known that Huawei, after being rejected by SC for the demand of stay order in the possible seizure of their bid security (2.5 percent of the total cost), is in mood to accept the project and go for pact soon after negotiation. So, after this deal, Huawei will be the sole vendor to install/operate 10 Million GSM lines (including 3G) in the whole of Nepal.
Meanwhile NT officials have already planned to seize Huawei’s bid bond worth $4.6 million if Huawei doesnot accept to pact a deal. Telecom pundits now claim that Huawei is in immense pressure to undertake the project and NT officials even seeking positive response from the Chinese vendor for the project. Some NT officials even go further to say if Huawei accepts this project, this is gonna be long term pact with Huawei and NT, as Huawei as already ousted ZTE (a ruling vendor before) in other projects in NT.