Nokia still rules in Nepal with abt 50 pc share, Top apps in Nepal

Share
Though total world market is dominated by Samsung, Android and Apple phones with Nokia to release new Lumia lineups partnering with Microsoft to regain the market share, the Finnish handset maker still has highest number of users in Nepal.
In a survey conducted by nepalitelecom.com from facebook and its website, it is found that Nokia still has around 48 percent share of the total handset market in Nepal. That includes normal handsets to high end smartphones but the non smartphone number is pretty high as near as 65 percentage of the total Nokia users. Samsung stands second with 25 share of the handset market and almost 70 pc of them being smartphones, so that makes Samsung the leading Smartphone in Nepal. Apple’s iPhone comes third with 10 percentage of the market share in Nepal. Statistics for HTC, Sony Ericsson, LG,Blackberry and all other Chinese handset market share is shown below in the pie chart. 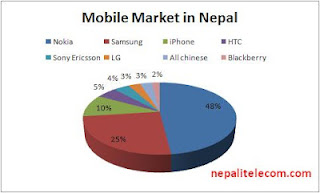 The survey also reveals the popular app in Nepal to be Opera Mini Browser, and Facebook, Nimbuzz, Mig33 are among others being used the most in Nepal. It looks like free messenger applications and browsers are found to be popular in Nepal other than gaming apps. Top free VOIP call and messaging applications include Viber, Whatsapp, Binu Messenger, Ebuddy, and Skype. 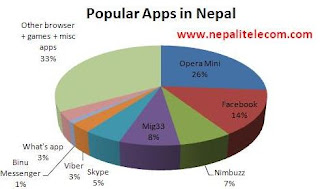 For a question asked to 1000 people in the internet (social medias and the website) about the quality of the network, only 46 % people feel the network to be “just ok” whereas 22 percent are not satisfied with the network quality. In a question for the preference of subscriber to choose either for Good voice quality
or fast internet, People are equally divided over the issue for the prospect of next generation networks. 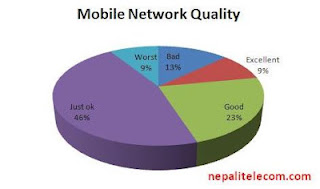