Share
April 07, 2015: Nepal Telecom, the government owned operator has been extending the 3G coverage to different parts of the country with the 10 Million GSM/WCDMA project. Though they have already provided 3G coverage to all the development regions, there are more areas without 3G coverage in Mid west and Far western region. In the recent week only, NT has operated 50 more new 3G sites in that region, which includes major cities like Nepalgunj, Dhangadi, Mahendranagar, Surkhet, Dang to remote villages. It is known that all other sites in that area will be operated within a week. People in Mid western and Far western region always complain to Kathmandu of bringing outdated equipment and technology to their place. Now that the 3G is being extended there, public from that area are found to be delighted with the 3G service. NT informs public of the extension, along with the procedure to change customer’s SIM to a 3G SIM, that can provide video call and fast internet service.

To subscribe 3G, you have to go to your Message box, type 3G and send it to 1400. Your SIM will be change to 3G within half an hour. To check 3G, you have to go to your mobile settings->Mobile Network/Cellular settings and put the network mode to Auto (which means mobile selects 3G where it is available, otherwise it will select 2G). For the city area, you can even put “3G (WCDMA) only” where the chances of having 3G network is high. For configuring your mobile set for 3G, you don’t have to worry as the settings is the same with that of GPRS. But for those who are not using GPRS service, all you need to do is put “Ntnet” in the Access point name inside the mobile Network settings which works for most of the mobile.
Here is a notice published by NT in a local daily in Nepalgunj for the extension of 3G and SLC offer. 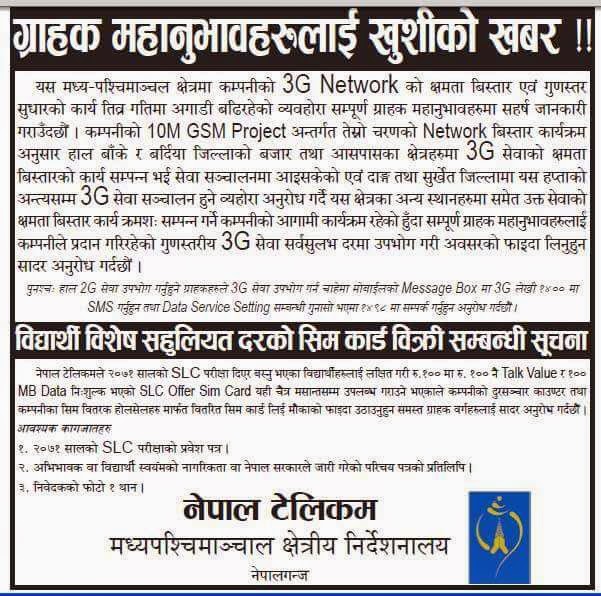