NT to phase out CDMA Nepal Telecom, the pioneer operator is known to phase out CDMA within 3 years span. CDMA mobile technology or service is the perfect technology to provide mobile coverage for a country with mountainous/hilly terrain. As GSM network expands to remote areas with the 10 Million project, NT plans to remove CDMA base stations gradually.

Currently, Ntc is implementing 2 Million CDMA project with which it is expanding 2G/3G services to remote areas. But with this phase-out decision, it seems the project expansion will stall. It was in 2006 that NT launched CDMA with limited mobility in Kathmandu and later extended to other parts.

NT brought EVDO (3G CDMA) service in 2010, providing data service (of 3.1 Mbps). NT holds around 1.5 million CDMA subscribers (including the data only users in EVDO through USB dongle). Customers living or traveling to the remote parts of the country prefer CDMA for voice call and data where there are no other means of communication available. NT is even providing cheaper data tariff in CDMA when compared to GSM.

But the current trend shows that the subscribers in CDMA are going down due to non-availability of different range of Handsets, the absence of some other services like Value-added services (VAS) and the growing coverage of 2G/3G GSM. 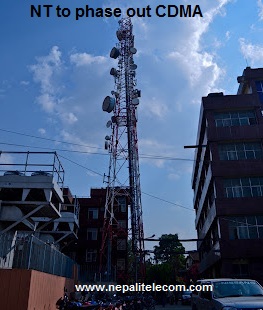 It is also in the world that CDMA technology has no evolution beyond 3.5G and even CDMA researchers/investors are opting for GSM family. Some people even say LTE is indirect evolution to CDMA and some operators are also using CDMA as the fallback network to LTE. The Global and national trend shows the decline in CDMA. But they should phase-out CDMA after a thoughtful plan and the implementation schedule.
With the growing 3G/4G networks, some operators already shut down CDMA and some like Singapore is planning to phase out GSM in 2017. which will avail more spectrum to the expanding 4G networks.

Fate of CDMA in Nepal

NTC’s Offer For Customers Migrating From CDMA To GSM…

Nepal Telecom Plans to Shut down CDMA service in this Fiscal…