Share
May 27, 2016: Government has revealed the annual performance review report of the last Fiscal year which tells the overall profit scenario in the public enterprises. Among the 37 PEs, only 20 could generate profit in the fiscal year 2014-15. In the previous Fiscal year( 2013-14), Nepal Telecom topped the PEs to generate Rs 11.55 billion profit which is now increased to Rs 14.55 billion, even though it couldnot make it to highest profitable PE for the fiscal year 2014-15. State run Nepal Oil Corporation (NOC) has earned Rs 15.04 billion profit in the fiscal year 2014-15 making it the top most profitable PE in the country. NOC had recorded a loss of Rs 8.3 billion in the fiscal year 2013-14. NOC has surpassed the Government owned telco Nepal Telecom by mere 500 million, it is due to the global decline of crude oil and Nepal not adjusting price significantly to the decrements, enabling them  to pay all debts incurred in some years.
Other highest profit makers include Rastriye Banijya Bank, Agriculture Development bank.
Here is the comparison of the best performing public enterprises for the fiscal year 2013-14 and 2014-15.
Source: Ekantipur 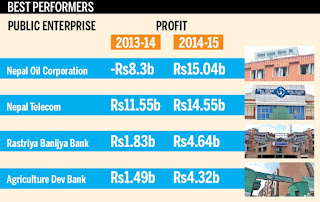