Share
Nepal has only 3 percent Internet access in their households. According to latest Census report (National Census Report 2068 2012) released yesterday by Central Bureau of Statistics (CBS), the internet reach in households is just 3.33 percent of the total population.
The report was released by PM Baburam Bhattarai at a programme inside SinghaDurbar, and was presented by CBS Director General Uttam Narayan Malla. According to the latest report, the total population of Nepal stands at 26,494,504 with 51.5% female and 48.5 Male. There are several other statistics, of which we will be mentioning only the phone related stats. (for more stats go to http://bit.ly/QGO4lE )

The reports also has the telephone access in households to be 7.37 percent, and the mobile phone access in households to be 64.63%. But the statistics according to the latest MIS report from NTA has the data/internet penetration rate, the telephone (Wired and WLL) penetration and the mobile penetration to be around 20%, 3.5 % and 59 %. As the data in the CBS census is in per household, it’s not easy to compare these two statistics.
Though the internet reach in households is very low, the number will be increasing in coming days with
Nepal Telecom’s WiMAX extending to the whole of Nepal. Also the fast roll out of Wi-Fi (most easily accessible internet) from private ISP’s, fierce competition between mobile operators NTC<->Ncell will boost the internet reach to rural areas. 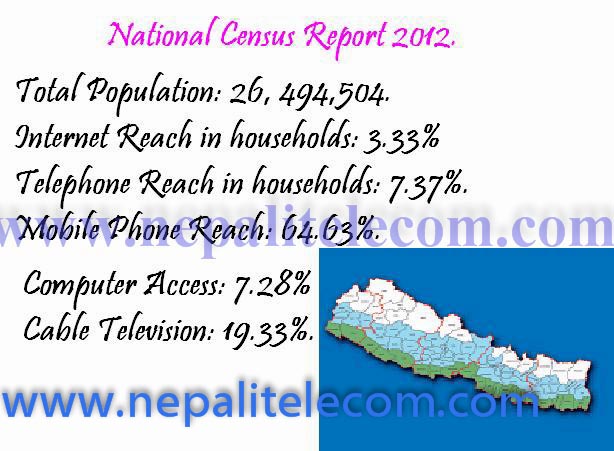