Share
There have been numerous reports from people regarding texts to their mobile, which says that they have
won huge sum of money with some international lottery/raffle. Though this sort of texts came earlier as

well, such sms are growing now in our country. The message says like “you have won…..dollars/euros/pounds in lottery/raffle”.
People aware of such spams are not giving attention to the text, but for the innocent mobile users, such SMS are making them confused. Some customers even went to telecom operators office to claim their money, they also demanded the operator to tell from where and which company is sending them the SMS.
Sounds funny but its not easy to convince them about the mobile spams esp. from foreign countries, that are sent  through internet for easy money.Telecom operators handle such spams by blocking the message sender to bar such incoming messages to its customers. In foreign countries, such texts are sent if you register your number in internet for some games or other services and once you get the SMS, certain amount will be deducted from your balance.
This post is actually written to make people aware of the spamming SMS. Nepalitelecom.com requests
people not to reply such texts which are mostly send through internet and has hidden motives of earning money from innocent/ignorant people. If you have got any such SMS, please write it down in the comment box with the sender number.
Here is a sample of a fake SMS sent in Nepal Telecom’s mobile. 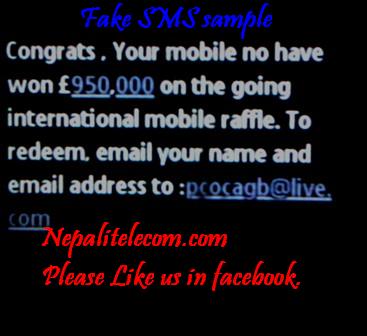