Xiaomi phones are the talk of the world after they brought it to countries other than China. Devices from Xiaomi, the No. 1 phone maker from China are known to be cheap, of build quality, and better UI. They were rumored to be available officially in Nepal many times, but that did not come true. This time it seems like Xiaomi devices will be officially sold here in Nepal with the distributor named XiaomiNepal. As they had promised about the two-year-old flagship phone Mi4, Xiaomi Nepal had made available the Mi4 exclusively from Kaymu.com.np (online shopping portal) from today.

Most of the gadget freaks would be knowing the previous flagship phones but to the other people, the Mi4 is a 5-inch phone, powered by a 2.5 GHz Quad-core Snapdragon 801 processor and has 3 GB RAM, 16GB ROM with no External card support.

Right now the only White color is made available. The single Micro-SIM phone has 13 MP/ 8MP rear and front cameras with manual controls, refocus (but no Optical image stabilization). The website says the device runs on Android 4.4, the latest MIUI 7 is already available for Mi4 which is a lollipop (Android 5.02 version). The price of the phone is made at Rs 24,500 whereas the introductory price is Rs 23,000. If you are searching for a cheap and decent 3G RAM phone, then this one suits your palette. 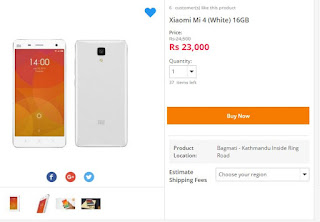 It is also known that Xiaomi Nepal will be bringing other Xiaomi devices like Redmi 2, Redmi Note 3, and the latest flagship Mi5 to the Nepalese market. As the Mi5 is also very hard to buy it online even in China, it seems it will take more than three months to get it launched here in Nepal. The Indian launch of Mi5 is slated for April.

Read all the Xiaomi Phone available in Nepal, with its price.

Tell us what do you think of the Mi 4 phone launch in Nepal?