How to select 2G, 3G mode in your smartphone?

It seems like 4G network will take some time to reach our country as the regulatory body has still not given nod for the operating frequency and license for the LTE technology. After licensing, the operators need to bring the 4G devices here and run them which will also take time. The near to 4G technology will give you speeds in tens of Mbps whereas for voice you have to rely on 3G or the 2G network. But for now, we have to make most of the 3G network for high speed internet, Video call and other services. For that, you need to select 3G mode properly in your phone.

Though 3G network has both the voice and fast data speeds available, you need to select the right network mode in your phone to go best with the network and your phones battery juice. Most of the cities in Nepal has got good 3G coverage but still they are not ubiquitous everywhere. So depending on the availability, you have to select the right mode. Some of the clever people put 2G (GSM) most of the time for voice calls but use 3G network for high speed internet. How do you do it?

Also read: 4G is already launched now, How to select 4G mode in your phone in Nepal?

Process to put 3G mode in your phone

We have a general process to suit for all mobile operating system, Android, iOS or Windows, as shown below. 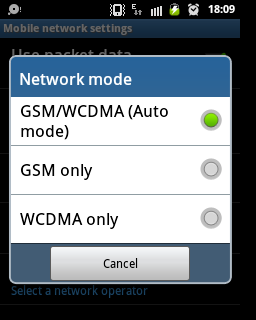 When to select 2G or 3G mode in your phone?

Above was just about how to select the different 2G/3G mode but let us explain when to select each modes. As most of the cities have good 3G coverage, then you can select the mode to be Auto which selects 3G mode when there is good 3G signal otherwise it will be in 2G mode. This mode is good when you have to keep on using high speed 3G data and be available for connectivity while moving.

Auto and 3G preferred mode is quite similar but some phones do not have such preferred modes. If you are sure about the presence of 3G signal at your place, you can put it to 3G only for smooth high speed internet without falling to 2G network. But for outskirts and remote areas, it will be better to put 2G (GSM) only in their phones, as phones attached to a weak 3G there will take up your battery juice very fast.