Samsung has launched the new Flagship phones Galaxy S7 and S7 edge in a program yesterday. The phones were launched by Samsung just ahead of Mobile World Congress, Barcelona on February 21, 2016, and made available for pre-book now in Nepal. The sleek handsets are built with 3D glass and metal, have Water and dust resistance, 4 GB RAM, 32/64 GB ROM with external memory support, 12/5 MP camera. The phones are powered by Octa-core (dual quad-core) processor and run on Android 6.0 (Marshmallow).

Samsung Electronics Nepal also announced special pre-booking offers on S7 and S7 Edge from March 10. Under the offer, every pre-booking will get a genuine leather bag worth Rs 20,000 or Samsung Gear VR worth Rs 13,900 for free. 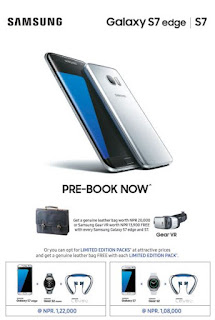 The handsets will be available in the local market from mid-March.

The price of the phones seems affordable only to those who do not mind spending a lakh here and there whereas it is also ideal for those who crave to own a ‘dream phone’ in a lifetime with the savings for some months. They should bring some exchange offer for those who want to exchange their recent flagship phones with this.