Share
April 7, 2016: Huawei Technologies Co. released its latest smartphone on Wednesday, as the Chinese tech firm mounts its most serious foray yet into the high-end device market long dominated by Apple Inc. and Samsung Electronics Co.
When unveiling the P9 smartphone in London, Huawei made it clear that the product was designed to directly challenge Apple and Samsung. As Huawei executive Richard Yu spoke at the event, the screen behind him showed how the P9 compared—favorably—with Apple’s iPhone 6s and Samsung’s Galaxy S7 on a number of specifications.
“We are slimmer than an iPhone 6s and slimmer than S7,” Mr. Yu said. The P9 has a 5.2-inch screen, which is bigger than the 4.7-inch screen of the iPhone 6s. While touting the phone’s high-end features—including a novel dual-lens camera developed in partnership with high-end German camera producer Leica Camera AG—Huawei priced the P9 below the marquee smartphones of its better-known competitors.
The basic model of the P9 has 32 gigabytes of storage and costs €599 ($683). In the U.K., Apple sells its cheapest iPhone 6s, with 16 gigabytes, for $759, and Samsung sells its simplest version of the S7, with 32 gigabytes, for $801. 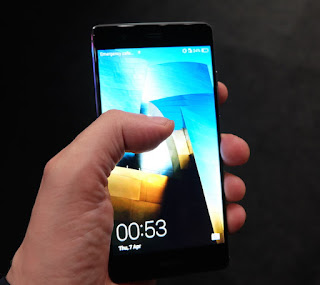 The phone will be available beginning April 16 in at least 29 countries, including China, several European markets and the Middle East. The company will also sell a version of the P9 with a bigger screen, called the P9 Plus.
Huawei is the market leader in China, but it faces tough challenges elsewhere. It chose to introduce the P9 in London, a market where mobile carriers’ subsidies have typically made Apple and Samsung phones more affordable, reducing Huawei’s price advantage.
Specifications of P9 Smartphone.
In terms of specs, the Huawei P9 has a 5.2-inch FHD Screen with 2.5D glass, comes with Huawei’s Kirin 955 (64-bit), octa-core processor, Android 6.0 OS, and a 3000 mAh battery. Huawei is launching the P9 in two versions, 4GB RAM + 64GB ROM and 3GB RAM + 32GB ROM. This is a 4G LTE ready smartphone, Huawei has only announced European pricing, with the P9 starting at 599 euros, which converts to around £485, $680 or AU$900 or NRs 72000 (Nepali price Converted), and its big brother the P9 Plus costs 749 euros, which is about £605, $850 or AU$1,125 or NRs 91,000. But we are not sure when this device will be available here in Nepal.