Purpose of 3G in Nepal: Survey

Share
Nepal is the first country to launch 3G (WCDMA) network in South Asia with the Government operator Nepal Telecom back in 2007, but the 3G network here is still not that ubiquitous. The rivalry of two major operators Ncell and Nepal Telecom to dominate the data market, drives them to expand the 3G network to different regions of the country and are equally competing to make the 3G service affordable.
Nepalitelecom.com (in its research for Nepali telecom market) did an online survey among thousand people to get the current scenario of 3G usage in Nepal. It seems like most of the 1K people are either current 3G users or prospective 3G subscribers.
According to the survey, most of them use 3G from the smartphone itself though we can use USB dongle and tethering on your PC (which has very less percentile). Among the reasons for not using 3G, people’s worry for the 3G to absorb more data and money is the main one (35 %), whereas the unavailability of 3G coverage in their place and quick battery drainage are found to be the other major reasons.
Regarding the questionnaire for the mobile network settings in their mobile, it is found that almost half put the settings in automatic mode, 30 percentage put in “GSM mode only” among which sixty percent of them switch to 3G when they need to surf the internet.
The satisfaction level of 3G is found little below the 50 percent mark mainly due to no smooth coverage of 3G, and Data tariff (not in accordance with published rate).
Other services from 3G like MMS and Video call is used very less of which Video call (20 %) seemed more popular than MMS (15 %).
It is also found that significant no of people use 3G inside their homes, in place of their fixed ADSL or cable or WiFi plans.
Majority of people seems to use 3G for Facebook which counts for 45 percent of the total usage, whereas other reasons are for email, news, Youtube and Video call. 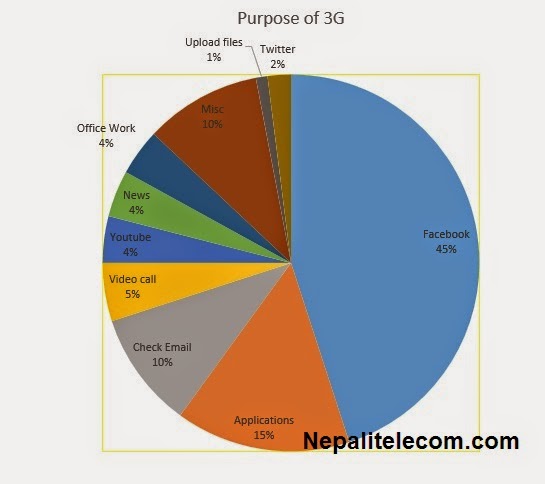