Share
Dec 21, 2015: TeliaSonera sold its stake in Nepalese phone carrier Ncell to Axiata Group for more than US$1 billion (1 Kharba NRs), taking the first major step in its plan to exit Asian and former Soviet markets to focus on Europe and its home Nordic region.
The Swedish phone company is selling a 60 per cent stake in Ncell for US$1.03 billion and also dissolving its interest in an additional 20 per cent stake owned locally as required by Nepalese law, it said in a Monday statement. The disposal results in a positive net cash effect of 7.5 billion kronor (S$1.24 billion) after provisions, and TeliaSonera plans to use the proceeds to cut debt.
With the purchase, Axiata will add to its telecommunications operations across Asia, from Malaysia and Indonesia to India and Singapore. It’s paying a total of about US$1.4 billion for an 80 per cent stake in Ncell, including the holding bought from TeliaSonera and about US$335 million for SEA Telecom’s interest in the Nepalese carrier. Axiata has more than 260 million customers according to its website. TeliaSonera is seeking to focus on European markets to capitalize on higher demand for wireless Web-browsing and video services, while exiting former Soviet countries and Asia amid bribery accusations. The carrier is embroiled in legal probes in Sweden, the Netherlands and with the US Department of Justice over how it bought phone licenses in Uzbekistan in 2007. TeliaSonera has said it’s cooperating with the investigations and its chief executive officer at the time has said the company broke no laws. 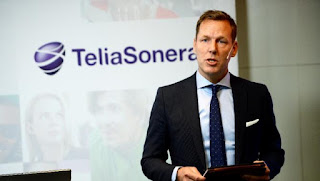 Shares of TeliaSonera advanced 1.1 per cent to 42.24 kronor at 9.27 am in Stockholm, giving the company a market value of 183 billion kronor. Axiata shares were halted on the Malaysian stock exchange Monday ahead of the announcement.
The transaction is set to be completed in the first half of 2016, TeliaSonera said.
Source: Bloomberg.com