As it is public that Ncell (largest private telco operator in Nepal) has ignored the tax involved in the 80 percent sellout to Axiata, people are furious about it and threatened to boycott Ncell if it does not pay the tax. Even leaders and organization including students’ wings of Political parties had initiated the campaign to pressure Ncell to pay the tax involved.

Malaysia’s Axiata in April bought Reynolds Holding, which held a majority stake in Ncell, from Swedish-Finnish company TeliaSonera at an enterprise value of $1.03 billion (1 Kharba rupee). The tax from the acquisition comes to more than tens of billions of Nepali rupees which is a lot for a developing country like Nepal. The Large Taxpayers’ Office (LTO) had instructed Ncell to file the tax return by May 7 which is today and a holiday so the deadline now is May 8 tomorrow.

Following the above circumstances and people’s anger towards Ncell (the private telco), Tweetarati start pressurizing them to pay the taxes through the hash tag #NoTaxNoNcell which is currently the most trending here in Nepal. It seems like the tweets are going viral on the issue and the pressure is quite building up as the deadline to pay the taxes is for tomorrow.
This is not the first time Nepalese have jointly put pressure from social media for the benefit of the country. It was during the earthquake to pressurize Indian media to stop exaggerating the news of destruction in Nepal, they made #GoHomeIndianMedia hashtag viral and similar was the situation with #backoffIndia for the protest against Indian blockade to Nepal. 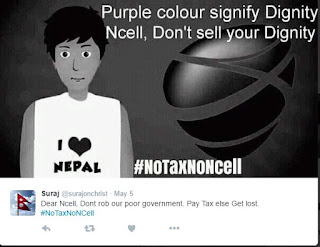 Teliasonera to walk out of Ncell

Teliasonera to walk out of Ncell